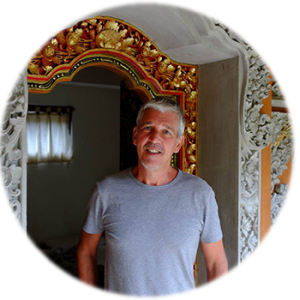 MY TRIP TO JAHOO GIBBON CAMP

During one of the long weekends we had in Cambodia, I decided to visit Jahoo Gibbon Camp for 2 days one night stay. Travelling from Phnom Penh, I booked online a VIP bus with bookmebus and took the Bayon Bus to Mondulkiri. Due to some last minute changes, I  arrangement to visit the site without a tour operator who normally supports the tourists’ visit to the site. So, it was a little bit of adventure of getting to the site…  In honesty, I wasn’t sure where I was going and missed the Seima Protected Forest signpost on the left-hand side of the road. In hindsight, I’m not sure how I missed it, but ended up at the police station about another kilometre down the road. I called the site and explained where I was and sure enough, a Moto turned up and off we went back down the road.

The journey is bumpy, to say the least, once you get off the main road, basically a deeply rutted mud track. I dread to think what it’s like in the rainy season when its thick mud. I arrived safe and sound but well shaken, so it was good to just sit at the camp and enjoy the view. The camp has a bamboo structure with a few very old and beaten rattan sofas for you to just sit and watch the wildlife.

That afternoon I took a wander into the forest on my own, just to see what’s there. The main site of the Jahoo Gibbon Camp, it’s not a very big place and the paths are easy to find if you wander off them. So, after around two hours of pleasant walking, I was disappointed to not see a single species of wildlife. Nothing!

I headed back to the camp, I was disappointed and hoped it wouldn’t be the same the following day.

As I arrived, the group of visitors who booked the 1 Day Tour were just getting back with their guide. They’d seen gibbons and lots of other wildlife and birdlife and were really pleased with the trip. They climbed into their 4WD and off they went. Hmmmm, maybe just bad luck on my part.

The camp area has just the bamboo structure for sitting and eating, then a row of robust and well-made tents, and behind the tents the shower block and toilets. The site is not that far from the local village and you can hear the occasional motorbike go past on the road, but other than that its dead quiet. In honesty, I found myself just sitting, doing nothing and staring out from the sofa, there’s a clearing in front of you with the forest in the distance. The land slopes slightly downward with the odd tree and bush scattered in the clearing. I watched the birds fly past and occasionally sit in the bushes. Probably the most notable was a small hawk. Binoculars would have been helpful.

After a few hours of relaxing my dinner arrived at the agreed time, the few staff very very friendly and welcoming. The food is local but geared toward the mostly foreign guests, and tastes really really good. Not a single meal that wasn’t delicious.

As with any outdoor trip I take, I always seem to get tired early – fresh air, relaxation and time to stop. With a 5am start the early night was a welcome excuse to sleep. I have to confess I had probably one of the best nights sleep in the last year. For a simple comfortable bed raised up from the floor of the tent and out of the cold air at night, it was extremely comfortable. It can get quite cold here compared to Phnom Penh.

Next day morning, I have booked the Gibbon, primates and wildlife watching tour. The tour starts early, so at 5am I was up, awake and ready to go. The sun was just coming up at this time, so you get that lovely half-light morning. As I waited for the guide to prepare, I spotted the already busy mini-wildlife below my feet.

We set off at just after 5am, our guide and two other rangers. The other rangers collecting data, and making notes for reporting back to their wildlife protection organisation- WCS. We took the same route I’d taken the previous afternoon, but at the crossroads in the middle of the forest, we stopped and just listened and waited. Our guide explained that there are only 8 gibbons in total in 2 groups. An older pair, and then a troop of 6. Sadly the older pair are too old to have any young.  We wait further and listen. Then, in the distance, we hear that distinctive whoop of a gibbon. They call to each other in the early morning and its simply a matter of then following the sounds. We take the path to the right and down to the stream. As we headed down the path we saw the first two gibbons high in the trees. It was amazing! Very different, seeing in their natural environment than in the Zoo. They are difficult to see here because of the thick bushes and trees, so you have to concentrate and be patient, as sometimes you just see the occasional dark flash between the branches as they swing between the trees.

We continue on, crossing over the stream and heading up the other side of the forest. The path trails upward, and it’s when we heard the rest of the troop. We were lucky, as this was a much better spot to be able to see them. There’s a small clearing down a steep bank and the gibbons were in the trees on the other side. They were just ‘larking about’, having fun as far as I could see. Like children just playing chase in the tree-tops. Swinging from one set of branches to another and back again. Their long arms making it look effortless. We just sat where we were and watch the show, one of the best views…. Back and forth they go. Occasionally picking up something to eat and then swinging between the same few trees. It was clear they could see us, but they didn’t seem the slightest bit bothered.

Eventually, the troop moved further into the ridge of trees, and we took the steep path down the bank and to the small stream. We lost them fighting our way through the bushes and branches, so we stopped by the river for a short breakfast break. A welcome breakfast of eggs, rice and meat with spices, with water and fruit to follow. I set with my tour guide and the local wildlife protection staff, we talked about wildlife, the world, life in general. Our guides made the whole experience so worthwhile. They were keen to know as much about their visitors as we are about wildlife. Whilst the breakfast was awesome, it was getting warmer and the mosquito appeared.  Wearing long trousers and long sleeves and using plenty of mosquito repellant is advised. I was quite happy in my shorts, flip-flops and a t-shirt until this point. 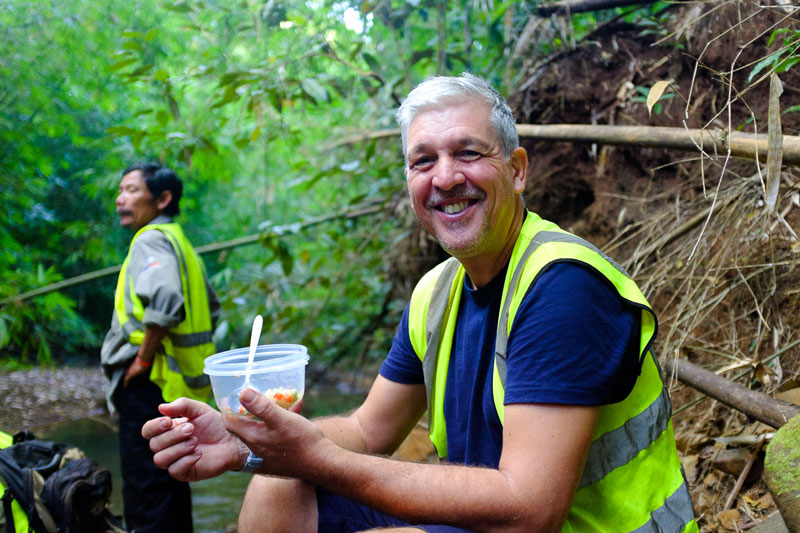 We walk back and made a circle up around the bank after breakfast. We didn’t see the gibbons again, but there was a wealth of lovely birdlife. Our guide heard the Hornbill, but sadly even with a detour off the path, we didn’t see it. However, as we climbed the hill I spotted something high in the trees. It was a long small bear-like creature. I had no idea what this was and tapped the shoulder of our guide, who was quick to admit he’d not seen this before, nor knew the name of it. ( We later discovered this was a Binturong)  The creature just sat high in the treetop just staring down at us for a good ten minutes before moving on.

We climbed back up the hill and came out into the clearing in front of the Jahoo camp. Sat and discussed our findings, looked at photos and lunch duly arrived. Again, food was to the usual high standard.

I cut short my trip as I had to return early, but for those taking the guided tour, there’s another trek into the forest after lunch.

If you’re a wildlife enthusiast, and even if you’re just an amateur like myself, I can really recommend the trip. Getting away from the city is a respite in itself, but the wildlife, the food and the expansive knowledge and friendliness of the guides is a real bonus.