I am not a big fan of package tourism to be honest. When I travel far away – and as a German, Cambodia is not exactly around the corner – in addition to discovering exotic places, for me it is all about the people, their habits and their cultural peculiarities that make vacation exciting. As I did some investigation on the Internet though, I rather quickly noticed that every travel portal that is willing to compete is now promoting “authentic” and “cultural” travel experiences . In the end, however, i find myself at a small bus stop in Phnom Penh’s very busy heart even though its still early in the morning . I am waiting for a vehicle to take me to the northern countryside of Cambodia. There I am supposed to visit one of the indigenous tribes, called Tampuan, who have lived here for centuries. Recently they offer indigenous homestays in Ratanakiri province as well as cultural activities for tourists within the Tampuan-inhabited villages. 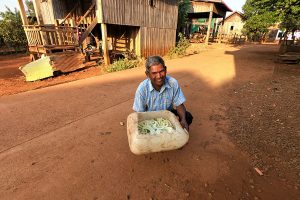 ON MY WAY TO RATANAKIRI PROVINCE

The minibus, which is supposed to lead me out of civilization, looks quite worn out already. The deep cracks in the front window put my trust to the test. All in all, however, the trip looks organized. We are assigned a seat, suitcases to be stored in the luggage compartment. All valuables we could keep in compartments next to us. I spend the next almost six hours bus ride dozing. I am only interrupted by our driver’s overtaking manoeuvres, which seem rather adventurous and are sounded with loud horns. A few short breaks for eating and peeing were rather welcome. Around 5:00 p.m. we finally reach one of the outskirts of Banlung, the provincial capital of Ratanakiri. This was the final stop of my trip. From here it should continue on foot to the city and several Tuktuk drivers already sense their business. After a short walk, however, I find a lovely family who greets us with a friendly “Suasdey!” and willingly takes me a piece into the city on their trailer. From one of the local dealers in the city, I organize myself a scooter. It can be rented on a day-by-day basis with the presentation of an identity card. And so I drive a few kilometres to the east and out of the city again. The paved roads will soon become wide dirt roads covered only by the red dust and stone. Though this seems to be quite characteristic of the region. 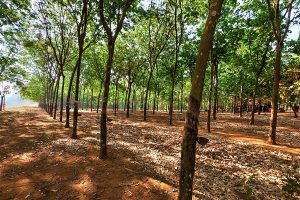 ARRIVING AT MY TAMPUAN HOMESTAY

After about 20 minutes I finally reach the first Tampuan village and thus the first homestay of my trip to Ratanakiri. I make my way through the village past some straying dogs and children playing and finally reach the house of Proun. He is one of the Tampuan residents and host of my indigenous homestays tonight. Proun is already waiting on the railing on the first floor of his wooden house built on stilts and warmly welcomes me. His wife and children, who are obviously busy washing dishes in the open kitchen under the house, are also looking at me with rather careful curiosity. Proun is a farmer and has a small rubber tree and cashew nut plantation. As he lives with his family in a Tampuan community, they also grow rice, pepper and cassava together in the countryside of Ratanakiri. Proun’s English is broken, but supported by some gestures and a lot of indignant friendliness, he manages to show me my room for the night as well as the toilet and bath house located outside the house. A bit exhausted from the trip, I take some time to briefly rearrange myself and take a shower. Showering in a Tampuan house takes some time getting used to. A pool filled with rainwater, a bowl for scooping the water and a drain – that’s all. After a few attempts at handling the bowl and the initially somewhat unusually cool water, I gradually start to enjoy it and finally stomp back into the peaceful evening village atmosphere with an unexpected trace of serenity. Proun wants to lead me over his fields before dinner and we get on the motorcycle again. We cross one of the red sandy roads and drive on trails into the adjacent jungle thicket. Through a slope in which we have to push briefly and past tall pepper plants and mango trees, we reach Prouns rubber trees. There is a carefully drawn slot on the narrow trunks of the trees from which the rubber resin runs into the wooden shells attached. We are surrounded by evening silence and thick vegetation. 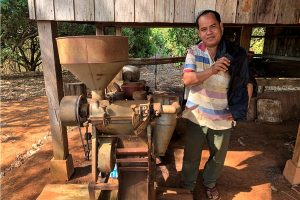 This is Proun, an indigenous Tampuan and host of my homestay for the time being

HAVING DINNER AND MEETING WITH INDIGENOUS VILLLAGERS

It goes back to the indigenous village where Proun’s wife has already prepared dinner at the homestay. I am very courteously asked if I eat meat and I agree with some sense of curiosity. Finally, there is a traditional Tampuan stew made of pork, beans, herbs and chilli and served with a large saucepan of rice. The food is spicy, but mixed with rice it is very digestible. I dine with Proun and Proun’s wife also sits down with us, although she has probably already eaten. We talk about my homeland and I learn more about the spiritual religion of the indigenous Tampuan in Ratanakiri, which clearly differs from the otherwise dominant current of Khmer Buddhism in Cambodia. After eating it goes into the fields again. This time I visit Proun with some Tampuan people who live in huts near the fields to work on the farms during the week. We join a community of about thirty indigenous villagers who have gathered in small groups sitting on the floor or tarpaulin. It seems to be an extraordinary gathering because the villagers are talking loudly and excitedly. I later learn that there was a dispute between spouses and the community is sitting together to discuss the incident communally. So, I sit down for a while and let the situation work on me. The sun has already set and a campfire is glowing in the middle of the small settlement. I get to know Sopeiak who belongs to the indigenous people of Ratanakiri and speaks English very well. He explains to me that he used to work as an English teacher a few years ago, but now works for a local NGO while running a small farm as well. 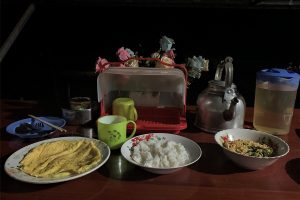 This is a typical Tampuan dinner: scrambles egg, rice and spicy noodles with herbs

As we talk about this and that, he asks me if I’m hungry. I had to admit that some time had passed since dinner at the homestay and he led me a little way apart from the indigenous camp to a row of thin trees. He asks Proun for some assistance and I gain the chance to watch the two men start uprooting one of the trees. They carefully brake off some tubers and answer with a grin: “Cassava!”. We wander back to the settlement and Sopeiak asks me to wait before retiring to one of the corrugated iron houses. A few minutes later he holds three hulled cassava – or in Germany also known as Maniok – tubers in his hand, which he now carefully distributes among the glowing woods of the campfire. Two beers and a few glasses of traditional rice wine (not particularly strong, but very tasty!) later I hold one of the steaming tubers in my hands. I have to say that was the highlight of the evening for me. Crunchy on the outside and creamy on the inside, with the taste of roasted chestnuts, it was simply delectable! Sated, satisfied and slightly tipsy, we finally make our way back to the indigenous Tampuan village and to my homestay.

MY FIRST NIGHT AT RATANKIRI HOMESTAY

My sleep at the homestay was rather short and nights in Ratanakiri turn surprisingly cold. In my room there was a wooden platform on which a blanket was spread. A mosquito net, a pillow and some thin blankets formed my bed for the night. In contrast to Phnom Penh, I needed several blankets to keep me warm at night. Around 6:00 a.m. in the morning the village came back to life. I was awakened by crowing roosters, barking dogs and the cheerful laughing of children. A little sleepy, I sneaked up to breakfast around 8:00 a.m. In Ratanakiri traditionally the indigenous people have rice even in the morning, but for me the homestay family roasted some of yesterday’s cassava roots as well. Alongside a very strong meat sauce was served, which Proun’s wife had pre-cooked earlier this morning and mashed in a bamboo tube afterwards in the typical Tampuan way – very spicy but quite delicious. I stayed a few more days visiting the region’s breath-taking waterfalls of Ratanakiri, learning traditional indigenous weaving of fabrics from the Tampuan and even was allowed to help a little with the production of rice wine. All in all, for me this was no trip of great relaxation nor of being served to a big extent. Rather this was a trip that made me want to get involved in the authentic situations I was able to enter and to honest people that I had the chance to meet at my homestay in Ratanakiri province.