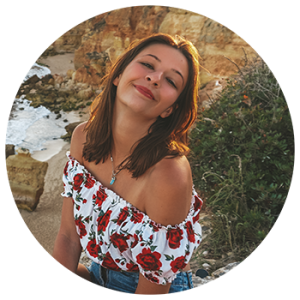 My EXPERIENCE IN HOMESTAY IN RATANAKIKRI

Ratanakiri province, located in the North of Cambodia, is full of exciting activities: it is possible to observe monkeys or rare birds in the forest, to hike in the jungle, to hunt waterfalls or to swim in the peaceful lake of Yeak Laom. However, the most incredible and authentic activity I have ever done was spending time in the Tribal Tampuan villages.
I had the chance to spend several days in different Tampuan communities with different homestay and discover the local daily life. 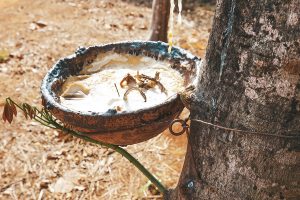 I started my journey from Phnom Penh where I took a direct bus to Banlung. The journey took approximately 8 hours. It was quite long, and the bus was not very comfortable, but we made several stops to eat and stretch our legs. We arrived around 3:30pm in Banlung, but the bus did not stop where I was supposed to be picked up. So I asked some locals who were on a motorcycle with a trailer in the back if they could not drop me further down the road and they directly accepted with a big smile and helped me with my bags. Once at the right place, I met Saroeun who is the leader of the different Tampuan communities, and she dropped me off at my first homestay.

MY FIRST DAY IN HOMESTAY

I arrived at the end of the afternoon at Sam’s house located in Phnom Village. There I received a more than warm welcome : Sam and his wife, Thoun, both welcomed me with a very big smile. They then showed me around the house and the surroundings and where my room was located. Luckily, there was a mosquito net around the bed because this area is full of mosquitoes.

Then I took a shower, the bathroom is outside in a small house. The tradition here is to wash before each meal. The shower was in fact a basin filled with water and there is a bowl that you must fill with water and pour it over you to wash yourself. The water was quite cold, so I learned from my lesson: the following days I washed when it was still sunny and warm. Indeed, in this region the nights can sometimes be very cold.

After my shower, the meal was already ready, and it smelled very good. It consisted of chicken and green vegetables simmered in a broth, there were different sauces, one of which was particularly strong with chili, and of course rice. So I had dinner with the whole family, even though they hardly speak English, we were able to communicate and we taught each other words in each other’s language. 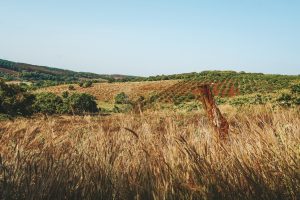 The next day, Thoun prepared me a hearty breakfast consisting of broth with pieces of beef, vegetable omelet and rice. I then went to Lon Village where a cultural tour awaited me and where I met our guide, Pern. I started the visit by Lon village: it’s quite small but the typical houses on stilts have all their particularities and form a harmonious whole. There I discovered the local daily activities and learned a little bit more about the Tampuan way of life, customs and culture.

We then stopped at a house where I learned the rice wine progress. A lady showed me the different steps to realize it and later I had the chance to try it and it’s strong. It’s the Tampuan’s traditional drink. 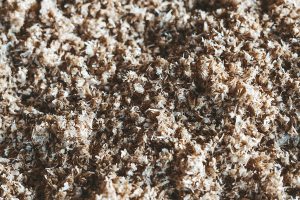 We then headed to the farms outside the village. We walked along a Rubber trees drill. The villagers grow these trees to harvest the latex. My guide explained to me that it takes several years to grow them and then a few more years to harvest a usable amount of latex that will then become rubber.

Then we arrived in the forest where the farmers live and work. The houses may be a few kilometers apart because the fields and crops can be very large. I saw the farmers doing different daily tasks in the wilderness, it was impressive to see. We then stopped at the top of a hill where the view of the fields and nature was amazing, the perfect place to take some pictures!

We then stopped at the farm in Pern where he showed me the machine that was used to make rice and explained how it worked and the whole planting and harvesting process. We finished the tour by walking along the fields and forests and finally returned to the village.
After this visit, it was time for dinner. So my guide took me to the nearby village called Lapo Village. There, I was treated to a typical meal served in banana leaves in the company of charming ladies. There was a salad of fresh vegetables, dried meat, rice and different sauces, it was delicious! 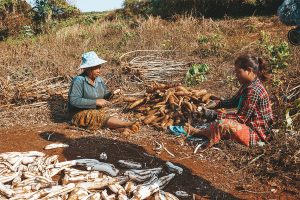 I then spent the rest of the afternoon in Chiro village where I met Nean and her charming little family. The houses are also on stilts because during the rainy season there can be floods. Her house was by far my favorite, it was very big and very well furnished. To access the kitchen, you must go out of the main room and walk on a small pontoon that give onto the outside, it’s unique.

After dropping off my things and taking a shower, I set off to explore the village. The atmosphere is rather calm there and people are very smiling and helpful, I remember asking for directions and several people came to help me. There is also a forest all around the village.
Later, I had dinner with the whole family. Nean is a very good cook, she prepared an omelet with mushrooms and vegetables, chicken broth and rice with some sauces on the side. She has four daughters, two of whom speak good English, so I was able to ask them all the questions I had in mind and vice versa, I really had a good time with them.

After the meal, the oldest of the girls asked me if I wanted to go to a funeral. I found it rather strange, especially since I don’t know the deceased. She told me that it was okay and that I should come, so I went. After 10 minutes on a motorbike on rather difficult roads, I arrived at the funeral and what a surprise! The villagers have a tradition of getting together when someone from the same village dies and they drink, eat and celebrate in honor of the deceased. It had nothing to do with my traditional idea of a funeral. So we joined the others, but first we lit a small stick that looks like incense that we planted with the others.

In the days that followed, I met other host families and explored the surroundings: I swam in Yeal Laom Lake, discovered two beautiful waterfalls, visited a Buddhist temple and learned the process of making rice wine. 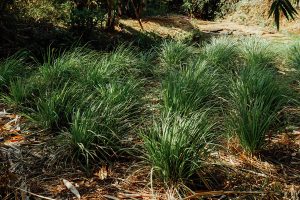 AN EXPERIENCE YOU CAN’T MISS!

This trip was incredible, and I would recommend it to anyone looking for authenticity and thirsty for culture and adventure. It allowed me to meet generous people who don’t have much, but who have a lot to offer. I hope to be able to return there soon and learn more about local life and Tampuan customs.