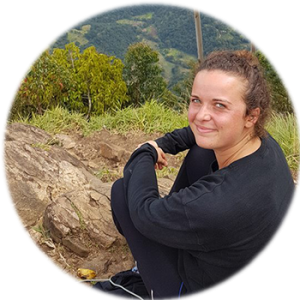 Kachang Waterfall, Ratanakiri province, is a short drive from Banlung town. The paved roads allow for access to the waterfall even in the thick of wet season.

If you have never been to Cambodia’s North Eastern province, Ratanakiri, I would recommend a few days here. With lots of culture, nature and remote areas there is plenty to see and do for day trips or extended stays.

From Banlung town, I arranged a motodop and headed out for an afternoon at Kachang Waterfall.

On the back of a Honda dream, with Heng my moto driver, I headed out of Banlung town past the old airport. This now dusty strip hasn’t had planes on it for years. Back in the early 2000’s, the airport was the most efficient way out of the province. Muddy roads had many people stuck here for days.

Now, paved roads have opened up the province, allowing for quicker getways. Still, an 8-hour a journey from Phnom Penh, 7 from Siem Reap. But it is the distance from the big smoke of Angkor Wat and the tourist trap that makes this province what it is.

Crater lakes and waterfalls were at the top of my list for time spent in and around Banlung. The day before I had toured indigenous Tampuan tribal villages and swam at the glorious Yeak Laom Lake. Today I wanted to relax, go at my own pace and see what else the province had to offer – Kachang Waterfall gave me that.

THE ROUD FROM BANLUNG

Heng and I headed down National Road 78 West from Banlung. To the right, we passed a pagoda. Its gates were beautifully painted in gold and turquoise green. As we drove I was constantly impressed by local characters on the road. For instance, farmers sitting atop large trucks of produce. Upon seeing a barang (a colloquial name for foreigner left over from French colonial times) they called out to me. I waved back and smiled. After 5 minutes along the highway we took a left turn onto another paved road and zoomed further from town.

The road to Kachang Waterfall takes you through local villages on the outskirts of Banlung town. On the side of the road shops sold petrol tinted green or yellow in old glass coca cola bottles. I saw tables stacked with vegetables and meat and freshly squeezed sugar cane juice.

As we drove, the scenery changed from villages to trees. Plantations of cashew and rubber are abundant in Ratanakiri and sadly this has meant a loss of much of the old forest. Cashew trees have thick trunk and oval shaped leaves and their branches spread horizontally. Whereas rubber grows straight up. These trees have thin trunks. Farmers at a funnel that winds around the trunk to catch the liquid that forms rubber.

Heng explained to me that following the Khmer Rouge, many families from other provinces move to Ratanakiri to farm. Now, he said, farming is a huge industry here and is the main source of income for most families in Ratanakiri.

After 25 minutes driving by moto we arrived at Kachang Waterfall. Trees speckle either side of the entrance. We purchased a ticket from the ticket office ($1 per foreigner) before driving further down the dusty road. There were a handful of motorbikes parked there already. To the right was a large tree, with vines drapped from it that looked like snakes. Heng gestured to a hammock below it and sat down whilst I went off to explore.

Kachang Waterfall has two levels, the water a muddy brown. The top, is slow flowing during the dry season and it is possible to wade in here. Locals say that it gushes dramatically after a bit of rain and can be too difficult to swim.

To reach the bottom of the waterfall, I headed down a set of wooden steps before I came to a suspension bridge. Hesitant at first, I treaded carefully across. To my left was a perfect view of the waterfall. At 12m high, the water falls dramatically over the rock cliff into the pool below, despite the lack of rain. A large tree covered the right side of the waterfall, providing shade below it.

To the right, the water flowed from the waterfall in a small stream. Tall bamboo and large trees were intertwined with vines and created a beautiful view. From the bridge, I wandered to the other side of the waterfall to the waters edge. I placed my bag down on some rocks and went to dip my feet in the water. The glory of Ratanakiri – I was the only one there. Stripping down, I went for a quick swim. The water was a muddy brown but still shimmered from the suns light. Feeling refreshed I decided to lazily read a book next to the water.

A BITE TO EAT

After a while, I headed back across the bridge and up the stairs to check on Heng. Upon seeing that he was sound asleep in a hammock I decided to look for some food. I purchased a cold drink, rice and fried vegetables and found my own hammock to relax in too.

Heng woke up not long after and I shared what was left of my lunch with him. As we went to leave, he stopped to show me a wooden hut close by to the car park. The front had a woven pattern made from bamboo. Tampuan people, an ethnic minority group of Ratanakiri had made the huts. At yesterday’s cultural tour at Tampuan Tribal Villages I had learnt a lot about local indigenous culture.

SUNSET FROM THE PAGODA

On our way back to Banlung, we stopped by the pagoda on the National Road 78. Up a dirt road behind the pagoda we came to a reclining Buddha statue in amongst cashew trees. Another 5 minutes and we were at the top. The view was hazy and the sun was red as it made its way to the horizon. A peaceful way to finish at relaxing afternoon at Kachang Waterfall.